Sri Mulyani, President Joko “Jokowi” Widodo has praised Finance Minister Sri Mulyani Indrawati for being awarded Best Minister in the World at the... Sri Mulyani, President Joko “Jokowi” Widodo has praised Finance Minister Sri Mulyani Indrawati for being awarded Best Minister in the World at the World Government Summit in Dubai on Sunday.

Jokowi said the award was acknowledgment of the country’s prudent fiscal management as well as careful and effective state budget planning and implementation.

“This is recognition not only for one minister. I think all Indonesians are proud of the award,” said Jokowi in Jakarta on Monday.

The award is based on an assessment by independent institution Ernst & Young and was presented during the World Government Summit in Dubai by United Arab Emirates Vice President Sheikh Mohammad bin Rashid Al Maktoum.

The award has been given out annually since 2016.

In her acceptance speech, Sri Mulyani said the award was recognition of accomplishments made under the administration of President Joko “Jokowi” Widodo, particularly in the economic sector.

She highlighted the hard work of civil servants working at her ministry in dealing with financial issues.

The World Government Summit is an annual event held in Dubai involving government representatives from all over the globe. At the forum, representatives of government officials, policy makers, experts and private companies exchange views about global trends.

The summit was attended by 4,000 participants and presented 90 speakers from 150 countries. All Indonesians Proud of Sri Mulyani’s Award (bbn, The Jakarta Post) 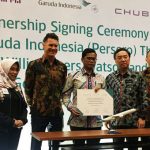