241 cities, regencies yet to establish investment task forces President Joko “Jokowi” Widodo has called on 241 cities and regencies across the... “For those who do not have the investment acceleration tax forces, please establish them soon. We do not want to lose to other countries,” Jokowi said in Jakarta on Wednesday when meeting with regents and mayors from across the country.

Coordinating Economic Minister Darmin Nasution said the task forces would be established in all government levels — ministries, provinces, regencies and municipalities — to help smooth coordination related to the business licensing process and to monitor the process at each bureaucratic level.

Such coordination is needed because investors have to move from the central government office to arrange their business licenses, Darmin said, adding that without any one in charge of the issue, no one would care about the speed in issuing licenses in regional administrations.

Darmin revealed that from all the provinces, only nine had fully completed the establishment of the task forces both in the provincial and regency/municipal levels. Those provinces are: West Sumatra, Bengkulu, Riau, Jambi, Bangka Belitung, South Sumatra, Yogyakarta, Gorontalo and Southeast Sulawesi. 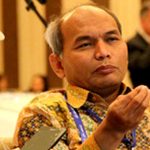 Fate of Eight Oil, Gas Blocks to be Decided Next Week