The aim of the project is to secure the sea lanes that connect Asia and Africa via the Middle East.

The three sites that are under consideration for port development are Dawei in southeast Myanmar, Trincomalee in northern Sri Lanka and Matarbari in southeast Bangladesh.

Japan, Myanmar and Thailand will jointly construct a new port in Dawei. It is expected that the cost will be anywhere from several tens of billions of yen to around ¥200 billion (US$1.83 billion). A special economic zone will be established alongside the new port and a highway will be built between Bangkok and Dawei, ultimately leading to a new economic bloc.

Japan, Sri Lanka and India will expand an existing small-scale port in Trincomalee into a trade port at which large ships can call. The cost of this project is expected to be between ¥10 billion and ¥13 billion.

In Matarbari, a new port will be constructed at a cost of several tens of billions of yen. It is envisaged that the new port will serve as a hub that will unload half of Bangladesh’s cargo volume, ultimately leading to the development of the surrounding areas.

The hope of the Japanese government behind these developments is that the improvement of harbors belonging to nations around the Indian Ocean will lead to the improvement of those nations’ coast guard abilities, which will boost security for tankers and merchant vessels.

It is also related to the fact that China has constructed overseas footholds in nations around the Indian Ocean based on a “String of Pearls” maritime strategy.

It is said that China had also sought the construction of new ports around Dawei and Matarbari, but failed to make progress because of Japanese plans.

China has obtained the right to use Hambantota Port in southern Sri Lanka for 99 years, and also supports the development of harbors in Pakistan, Bangladesh and Myanmar.

As Japan aims to improve its relationship with China, it has taken a stance of cooperating on projects related to the Belt and Road mega economic zone initiative pursued by Chinese President Xi Jinping. However, the Japanese government plans to avoid cooperating on the development of harbors that could possibly be developed into military strongholds for China. Japan to offer aid for Indian Ocean ports  (Topics: This article appeared on The Japan News newspaper website, which is a member of Asia News Network and a media partner of The Jakarta Post)[:] 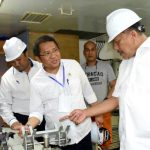