Fortunately, amid the contraction brought by the large-scale social restrictions (PSBB), the digital transformation of various merchants and brands had absorbed the shocks to the national economy by bouncing back on its sales figures through online channels. Thanks to the online sales activities, domestic consumption could retain its status as the biggest contributor to national GDP once again, said Institute of Development of Economics and Finance (Indef) senior economist Aviliani.

Initially, when the government imposed PSBB and ordered brick-and-mortar retailers to temporarily cease their operations in March 2020, after the pandemic had been announced, the contribution of domestic consumption to the national economy declined significantly, according to Aviliani.

“Yet in the second and third quarters of 2020, domestic consumption recovered again, after lots of merchants had started to join e-commerce platforms, using digital transactions,” Aviliani told The Jakarta Post over the phone on Feb. 18.

With the boost given by the online marketplaces and digital transactions to help homebound sellers and buyers conduct their transactions remotely, in the third quarter of 2020, the contribution of domestic consumption to national GDP bounced right back to around 57 percent, according to BPS data.

Indonesian e-commerce platforms were also enjoying the boons of the digital transformation boom, while supporting the digitalization of merchants, especially micro, small and medium enterprises (MSMEs) in a mutually beneficial synergy to survive 2020’s economic shocks.

Indonesian technology company with the leading marketplace platform Tokopedia, for instance, has recorded a significant increase in the number of online merchants and buyers in its marketplace as of late.

With a distinct mission, the platform has aimed to contribute to 5 percent of national GDP in the years to come.

Research by the Institute for Economic and Social Research at the University of Indonesia’s School of Economics and Business (LPEM FEB UI) has revealed that today, Tokopedia has contributed more than 1 percent to the country’s economy through its online marketplace activities. Tokopedia has also succeeded in taming inflation thanks to its efficient distribution and logistics system, resulting in prices that are almost 21 percent cheaper than average market prices, thus helping drive domestic consumption in Indonesia.

Furthermore, the platform also collaborates with the #BanggaBuatanIndonesia (Proud of Indonesian Products) program initiated by the Coordinating Maritime Affairs and Investment Ministry to help market MSME products online. The collaboration has also diversified the platform’s offerings, thus enlarging their customer base.

What do people buy during the pandemic?

According to Aviliani, Indonesians have implemented financial austerity in the face of the pandemic, prioritizing their primary needs such as food and shelter, which marks a departure from the pre-pandemic expenditure, which was oriented more toward secondary needs, which included leisure and entertainment.

“Domestic consumption during the pandemic also shifted to new sectors such as health care, as people’s concern about their health increased in light of the pandemic. For instance, more people have been buying more vitamins than ever,” she said.

Indonesian online marketplaces also record the same trend. According to Ekhel, various sports equipment had become wildly popular among homebound buyers throughout 2020. “Transactions in Tokopedia’s sports and hobbies category have doubled compared to 2019,” he said in a written statement.

Apparently, homebound customers, who might be feeling down and out most of the time due to the pandemic situation, which is in a constant state of flux, also sought leisure activities beyond sports which could nourish them mentally and emotionally.

According to Tokopedia, sales of books doubled throughout 2020, indicating that people were reading more books during the pandemic than in 2019. At the same time, more and more people were taking up gardening, as you might already have seen on people’s social media accounts. For Tokopedia alone, sales of gardening products increased fourfold during 2020 compared to 2019.

Finally, painting also became a newfound hobby among people in 2020, including the paint by numbers technique, which makes it very easy for laypeople to just follow coloring and imaging patterns to create their own beautiful artworks from home.

As people are staying home longer, cooking and home decoration have also become a new trend. In 2020, the Home and Living products category on Tokopedia also doubled compared to 2019.

As a whole, besides benefiting the national economy on an aggregate level and benefiting the merchants on a more micro scale, the online selling and buying activities propelled by these marketplaces have also benefited the technology sector ecosystem as a whole, according to Aviliani.

“Understandably, the information and technology sector has also received a boost, as the work-from-home and online schooling activities have made people highly dependent on their mobile connections, thus requiring them to buy phone credit more frequently than ever before,” she continued.

The importance of domestic consumption for national GDP

Furthermore, according to Aviliani, in 2020 Indonesia was able to absorb its pandemic-related economic shocks thanks to government spending, which grew 9 percent in the third quarter of the year through the National Economic Recovery program and state budget for urgent necessities. In the second quarter of the year, government spending growth stood at minus 6.9 percent. 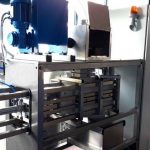