Light at end of tunnel for auto industry as June car sales rebound: Experts. Indonesia’s automotive industry players can breathe a sigh of relief as national car sales in June rebounded strongly, promising a smoother road for the rest of the year, analysts have said.

National car sales jumped more than threefold in June to 12,623 units from a record low 3,551 units a month before, according to Association of Indonesian Automotive Manufacturers (Gaikindo) data compiled by diversified conglomerate PT Astra International. Despite the rebound, sales in June were almost 79 percent lower year-on-year (yoy).

In total, sales reached 260,933 units during the first half, a plunge of around 46 percent from the same period last year.

“We expect the recovery to ramp up ahead,” RHB Sekuritas analyst Andrey Wijaya wrote in a research note dated July 16. “We are also positive on monthly sales, as national retail sales came up to 29,682 units (+74.8 percent mom [month-on-month], -54.6 percent yoy)–which means dealers’ businesses have begun to return to normal levels.”

However, he warned that an increase in COVID-19 infections would have a severe negative impact on the auto industry, as well as a further weakening in global economic growth.

Car sales have become one of the indicators of Indonesia’s household spending, which accounts for more than half of the country’s gross domestic product (GDP).

Indonesia’s automotive industry was hit hard by the government’s decision to implement large scale social restrictions (PSBB) in several cities nationwide to curb the spread of the coronavirus. Car wholesales nosedived in April and hit rock bottom in May with a more than 95 percent annual drop as the pandemic hit demand.

A rebound in car sales in June is highly likely due to pent up demand after most dealers closed their doors for more than two months due to the partial lockdowns, Sucor Sekuritas analysts wrote in a report on July 1.

“Although it is still too early to conclude that purchasing power has returned, we are happy to see that sales performance has started to gain traction,” they wrote.

Gaikindo co-chairman Jongki Sugiarto told The Jakarta Post on Monday that carmakers aimed to sell at least 30,000 cars in July to achieve its sales projection of 100,000 cars in the April-July period.

Automotive industry expert Bebin Djuana said on Tuesday that manufacturers should keep their production low despite the sales increase in June, as falling car demand from March to May caused rising car stocks in dealers across the country.

Four-wheeled vehicle production reached over 82,000 and 89,000 units in February and March, respectively, according to Gaikindo data.

The car production rate dropped by April and hit rock-bottom in May with only 1,997 cars being produced during the month. The production number climbed in June with 16,000 units, as car sales started to rebound.

The improvement in the industry is expected to be beneficial for Astra, half of whose revenue is sourced from the automotive business, according to RHB Sekuritas and Sucor Sekuritas analysts.

Astra, whose stocks trade at the Indonesia Stock Exchange (IDX) under the code ASII, traditionally hold more than half of the country’s car wholesale market share but its share dropped to a record low of 31 percent and 38 percent in May and June, respectively.

“We believe ASII is likely to benefit in the longer term, supported by our unchanged thesis of an increase in demand for higher-capacity automobiles, as the new normal (social distancing, public health fears) may result in the public leaning more toward using private vehicles over public transportation,” Andrey of RHB said.

Astra’s stocks had dropped 2.79 percent as of 2:36 p.m. Western Indonesia Time on Wednesday as the main gauge, the Jakarta Composite Index (JCI) slipped 0.24 percent. The stocks have lost 23 percent of their value in the last year. Light at end of tunnel for auto industry as June car sales rebound: Experts (Mardika Parama, prm, The Jakarta Post) 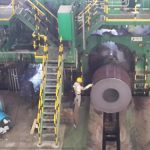