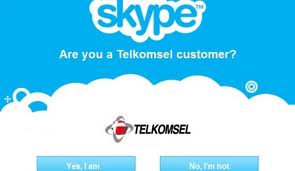 Taking a lesson from the expansion of BlackBerry services in Indonesia, PT Telekomunikasi Selular (Telkomsel) is trying to outmaneuver other mobile phone carriers in the country by forging a strategic partnership with Skype, the market leader in Internet-based telecommunication services.

Under the deal, the first of its kind in Southeast Asia, Telkomsel will bundle exclusive access to Skype applications along with data services for smartphone customers using a variety of operating systems, including Android, BlackBerry OS, Symbian and soon J2ME.

Telkomsel planning and development chief Herfini Haryono said competition has forced cellular phone carriers to be more inclusive by allowing customers to access a multitude of applications that were available on the market.

“We have learned from our experience with BlackBerry. At the end of the day we could not isolate its growth because of huge demand. We had to adapt in an already saturated market.”

“Now we have to be proactive in anticipating what will be the next big thing. We see that peer-to-peer telecommunication services might be it. Instead of being defensive, why don’t we sit down together and gain something?” Herfini said.

Herfini said he hoped the deal would lure some of the estimated five million local PC-based Skype users to use the service through mobile devices powered by Telkomsel’s cellular network. Dan Neary, Skype’s vice president and general manager for the international market, said that Skype applications were available for some smartphones independent of mobile carriers and would remain so. However, he said, an optimized service would allow users enjoy improved performance.

“It’s about specific optimization against performance across the Telkomsel network. You can only get that through a partnership,” Neary said.

For Skype, he said, cooperation with a partner that currently had 105 million registered customers would bolster its already strong presence in Indonesia.

“When you look at other companies that have done well here — Facebook, Foursquare — we think there is an enormous opportunity here,” Neary said. (The Jakarta Post,  27 October 2011)

Follow us on
Up Next: Govt to build new airport in to ease load on Soekarno-Hatta