Japan’s factory output rises for fourth month on jump in car, machinery production. Japan’s industrial output rose for the fourth straight month in September as the world’s third-largest economy continued to shake off the drag from the COVID-19 crisis largely thanks to improving external demand.

Separate data showed the September jobless rate held steady, while the number of available jobs per applicant fell to the lowest level since late 2013.

Official data released on Friday showed factory output surged 4.0 percent in September from the previous month, mainly due to strength in car and production machinery manufacturing.

“The output recovery in the automobile industry and in high-tech components whose production moves closely in line with exports is the overall driving force.”

The jump beat the median market forecast of a 3.2 percent gain in a Reuters poll of economists, and compared with a downwardly revised 1.0 percent rise in August.

Manufacturers surveyed by the Ministry of Economy, Trade and Industry (METI) expect output to rise 4.5 percent in October and 1.2 percent in November.

The government kept unchanged its assessment of industrial production, saying it was picking up.

The economy posted its worst postwar contraction in the second quarter due to the coronavirus pandemic but has been gradually recovering. Gross domestic product data due on Nov. 16 is expected to show a return to growth in the three months through September, thanks in part to a rebound in exports and output.

But some analysts warned that capital spending will likely put a drag on third-quarter growth as firms are forced to put off investments due to the heavy impact of COVID-19 on corporate earnings.

” Output of capital goods, which are an indicator of the health of capital spending, rose just 2.6 percent from the previous month, following a steep 4.5 percent fall in August.

Prime Minister Yoshihide Suga will announce next week a plan for extra stimulus measures to speed up the patchy recovery, four government and ruling party sources told Reuters this week.

Although the size of the package has yet to be decided, some ruling party lawmakers have already called for one of about 10 trillion yen (US$95.51 billion), including measures to stimulate domestic demand.

The jobs-to-applicants ratio fell to 1.03 in September from 1.04 in the previous month to hit its lowest level since December 2013. Japan’s factory output rises for fourth month on jump in car, machinery production (Daniel Leussink,  Reuters, The Jakarta Post) 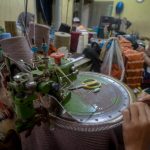