Lone gamers a dying breed as community play thrives. The lone gamer appeared to be a dying breed Tuesday at a premier industry event as play took to the cloud where contenders join forces or face off as foes.

Industry insiders and game lovers thronged to the premier Electronic Entertainment Expo ( E3 ) show floor that opened here on Tuesday for peeks at hot titles set for release in the year ahead.

Once known for secretive demos given behind closed doors to partners and press, E3 has opened its doors to fans, reflecting trends toward cooperative online play and broadcasting action as spectator sport.

The advent of streaming games Netflix style from the internet cloud promised to fuel those trends, tapping into the power of datacenters to let countless people play simultaneously in shared worlds or tune in to watch.

She added that Google’s soon-to-launch Stadia service will also open doors to weaving the internet giant’s other offerings, such as YouTube, into game life.

Video games were the number one source of home entertainment globally last year, handily eclipsing films, television, and music, according to statistics cited by Melchoir.

Of the billions of dollars spent on video games last year, more than half of that revenue came from play on mobile devices.

Studios making games for consoles or personal computers see wisdom in building communities of loyal players who continually engage with titles the way they might with a hit television series instead of finishing them and putting them down, as they might a good book.

“If you want to maintain a base of subscribers, engagement is key,” said Hugues Ouvrard, head of Xbox in France.

“You have to offer them new games or new features.”

The power of datacenters will allow artificial intelligence to be put to work making game worlds richer in streamed services.

Players could be able to climb any tree in a forest, or chop a branch to make a bow. Wide worlds could be populated with software characters with unique virtual lives and daily routines.

But, never-ending games mean relentless work for real people working in studios. A growing concern in the industry is that “crunch” time that once involving long, stressful hours just ahead of a title launch is becoming a perpetual condition.

“The production cycles for our games are evolving, especially with more of them developed as a game-as-a-service, in which there is less ramp up and ramp down than traditional game production,” Ubisoft chief and co-founder Yves Guillemot told AFP.

“In parallel, our working methods are evolving and leading to efficiency and productivity gains. This all helps to foster a healthier work-life balance.”

A consolation in cloud-based games is that studios can make one title for streaming to all kinds of internet-linked devices instead of needing to tailor software for different hardware and screen sizes.

Microsoft’s strategy for supplying fresh content for its subscription game service included ramping up its stable of in-house game studios to 14.

“Rather than crunch people, we bought more studios,” Ouvrard of Xbox said.

Microsoft at E3 revealed it will release a next-generation Xbox next year to assure players consoles are not going away, but said that cloud gaming is a core of its strategy.

“There is no reason why most video game consumption wouldn’t be subscription based. It’s a no-brainer.”

Contenders in the game-streaming arena will need content, cloud capacity and a community of players.

Along with Google’s Stadia game streaming service, Microsoft is also building on its Xbox success with an xCloud service. Eyes are on Amazon to see whether it will leverage its leading AWS cloud business and its popular Twitch gaming community to host titles online themselves.

“We are getting to a point where any phone, any screen is going to be a way to play these games,” Josh Schmidt, who runs game-focused website N64Josh, told AFP on the E3 show floor.

“It’s super-convenient, but I do have a ton of concerns. If I have to subscribe to 15 different services, what is that going to do to my bank account.”

Schmidt said he probably has more friends online than offline, and that E3 was rife with first-time real-world encounters of friends who met in game worlds. 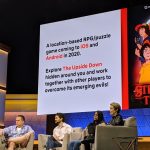 Netflix Gets Its Game on at E3 with ‘Stranger Things’