W. Java’s Kertajati Airport starts commercial operation in June Kertajati International Airport in Majalengka, West Java, will open its doors to the public in June in time for Muslims across Indonesia to travel to their hometowns for Idul Fitri, according to West Java Governor Ahmad Heryawan.

“The airport will be used for the Idul Fitri exodus; it can be used for any flights,” said Ahmad, who was at the airport to welcome President Joko “Jokowi” Widodo, who landed in Kertajati with the presidential plane to mark the start of its operation.

He added that an international seaport in Patimban, Subang, located 42 kilometers from the airport, would help support the airport.

“The integration [between the airport and seaport] is expected to help West Java’s economy grow faster,” he said.

The president expressed his hopes that the 3,200-hectare airport would also attract investors to the province.

“If we develop the facilities, investors will come,” Jokowi said. 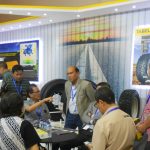