Pompeo says US to seek “new ways” with Indonesia over South China Sea. US Secretary of State Mike Pompeo once again slammed... Pompeo says US to seek “new ways” with Indonesia over South China Sea. US Secretary of State Mike Pompeo once again slammed “unlawful claims” by China in the South China Sea during his visit to Jakarta on Thursday, adding the United States will seek new ways of cooperation with the Southeast Asian country to ensure regional maritime security.

Speaking to reporters alongside his Indonesian counterpart, Retno Marsudi, Pompeo praised Indonesia for taking “decisive action to safeguard its maritime sovereignty” in the North Natuna Sea.

“I’m looking forward to cooperating together in the new ways to ensure maritime security and protect some of the world’s busiest trade routes,” Pompeo said.

“All law-abiding nations reject the unlawful claims made by the Chinese Communist Party in the South China Sea, as it’s clear from Indonesia’s courageous leadership on the subject within ASEAN and at the United Nations,” Pompeo said, referring to the 10-member grouping Association of Southeast Asian Nations.

“It’s a cause worth pursuing in multilateral settings, and the Trump administration very much supports this,” he added.

Retno did not mention China directly but stressed that “the South China Sea should be maintained as a stable and peaceful sea.” “International laws…must be respected and implemented (and) therefore, any claims should be based on universally recognized principles of international law,” she said.

The North Natuna Sea is located north of the Natuna Islands, a remote archipelago that China officially recognizes as Indonesian territory. In July 2017, Indonesia redefined the northern reaches of its EEZ as extending to the North Natuna Sea. Pompeo says US to seek “new ways” with Indonesia over South China Sea   (Kyodo News, The Jakarta Post) 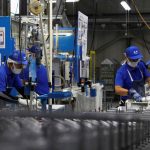