Govt Aims for 2021 Budget Deficit at 5.5 Percent of GDP, Sees Growth Near 5 Percent Govt aims for 2021 budget deficit at 5.5 percent of GDP, sees growth near 5 percent. The government expects Indonesia’s state budget deficit to remain wide next year to provide room for efforts to support economic recovery and structural reforms amid the pandemic-induced uncertainty.

The government has proposed Rp2.74 quadrillion (US$186.08 billion) in state expenditure next year, while state income is expected to reach Rp1.77 quadrillion.

The resulting budget deficit is therefore projected to reach Rp971.2 trillion or 5.5 percent of the gross domestic product (GDP) next year, which compares to an estimated 6.34 percent of GDP this year, as the government continues its stimulus into next year to stoke economic activity.

“The 2021 state budget is designed to accelerate the economic recovery nationwide amid the COVID-19 pandemic,” Jokowi said in his speech on the 2021 state budget draft before lawmakers on Friday. “The fiscal relaxation of more than 3 percent will be needed again.”

The government issued Law No. 2/2020 this year that allows, among other things, for a state budget deficit beyond the previous 3 percent cap, as it seeks to fund its pandemic response with more debt.

Jokowi assured the public that the deficit would be funded using “secure financing sources” and would be prudently managed.

“The financing of the 2021 state budget deficit will be done in cooperation with the monetary authority while maintaining fiscal and monetary discipline and integrity, credibility and the market’s trust in government debt papers,” he said.

The government and Bank Indonesia (BI) have agreed to a burden-sharing scheme worth Rp 574.59 trillion to finance the nation’s COVID-19 response and bolster economic recovery efforts. The scheme will be implemented only this year, and the bonds will be tradable, which will allow Bank Indonesia to use them for its monetary operations.

Indonesia’s economy shrank 5.32 percent year-on-year (yoy) in the second quarter as economic activity fell significantly. The government expects economic growth of no more than 1 percent this year, or a contraction of 0.4 percent in its worst-case scenario.

For next year, it projects a rebound with GDP growth between 4.5 percent and 5.5 percent.

“This growth is expected to be supported by increasing household spending and investment as the main drivers,” Jokowi said.

The government plans to provide Rp356.5 trillion (US$24.04 billion) in stimulus spending next year to bolster the economic recovery and procure the coronavirus vaccines, Jokowi went on to say.

“We are hoping that the state spending policy allows us to achieve development targets in 2021,” the President said. The govt expects a poverty rate of 9.2 to 9.7 percent and an unemployment of 7.7 to 9.1 percent next year.  Govt aims for 2021 budget deficit at 5.5 percent of GDP, sees growth near 5 percent (Adrian Wail Akhlas, The Jakarta Post) 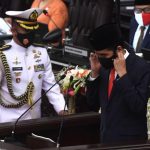