“The train cars purchased by Bangladesh are larger with stronger structures and thicker walls and roofs. It is twice as strong as an ordinary train car,” said Inka finishing manager Agung Budiono on the sidelines of a visit by lawmakers to an Inka factory in Madiun, East Java on Thursday as quoted by kompas.com.

Indonesian train users used to sit on the roof while traveling, particularly for short distance trips, but it is now strictly prohibited. 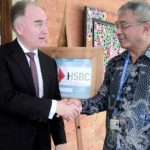