This deal will allow GMF to support the operators of Airbus A320 and A330 aircraft in Indonesia and in other Southeast Asia countries in component maintenance.

Under the agreement, Airbus will hand over several tools for component maintenance such as landing gear control interface units, static inverters and slat flap control computers and others.

“It is a list of components basically on landing gear, wings and other components such as braking system components. So, it is a mix of different mechanical components,” said head of Airbus customer services Asia Pacific Bruno Bousquet during the signing ceremony.

“This agreement is in line with the Airbus Flight Hour Services [FHS] commitment to deliver components in a seamless and timely manner, wherever they are needed,” added Bousquet.

GMF AeroAsia business and base operations director Tazar Marta Kurniawan said the cooperation would bring many benefits for Airbus operators in the Asia Pacific region, especially in saving time and costs in terms of aircraft component maintenance.

“[With this agreement] the Airbus components do not need to be sent to Europe if they need repairs,” Tazar added.

Tazar said the agreement was part of the expansion of its long-term relationship with Airbus. The new agreement will also improve GMF AeroAsia’s capabilities in supporting more airline operators within Indonesia and the Asia Pacific region. 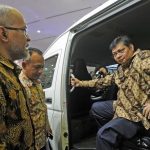